Last year we wrote the an article, featured below, ahead of the mayoral and several important local elections.  Despite the election of Bill DeBlasio, supposed hospital supporter extraordinaire, and Leticia James as public advocate, the conditions of healthcare for poor and working class people in the city have definitely not improved.  Shortly after de Blasio’s election, LICH hospital finally closed under the spirited protest of workers and community members.  Conditions for Home Health Aids continue to decline, and the public housing projects near closing hospitals go heavily policed and with intermittent services such as electricity and water.  Despite the inability for elected officials to change these conditions, FloJo isn’t discouraged.  Over the last year we’ve met incredible people engaged in struggles against their exploitative conditions and for a new kind of care.  This month we’re launching our “Care Worker’s Support Network” to help build campaigns of struggle in workplaces around the city–so hit us up if you have demands in your workplace or community and need support.  This election day, we’re “voting” for everyday people–CNAs, HHAs, nurses, patients, teachers, secretaries, nannies, and everyone struggling to create a new world!

Besides LICH, here are some exciting struggles of the last “election” year: 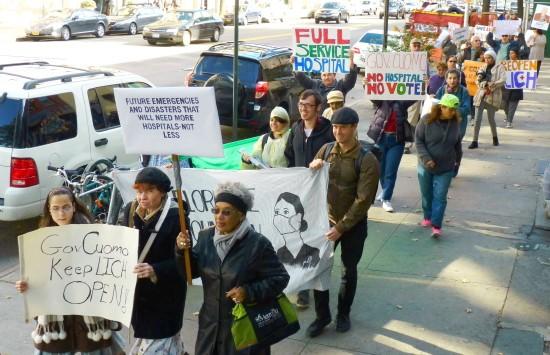 community members and FJC protest the final sale of LICH. This protest featured tons of politicians shamelessly plugging their campaigns, even the “most liberal” Brad Lander, thanking the same police who put so many people in the hospital for being there.

Click here or scroll down to continue to last year’s “Election day Special!”

This past week, the Democratic primary seems to have taken over New York.  If you’re a union member, your phone has likely been ringing off the hook–not because someone has finally addressed your 20-month-old grievance, or has called for a much needed strike action to prevent thousands of layoffs in your job, but to remind you to “get out the vote!” today.  If you’re one of the millions of non-unionized, unemployed, or disabled people in this city, then for the last several months you have been getting endless campaign notifications in the mail along with news of medicare cuts, medicaid “redesign”, and a smaller balance on your SNAP cards. And if you are a hospital worker, a teacher, a cleaner, a kitchen worker, or one of the 100,000’s of people facing the loss of their local hospital (as is the case with the imminent closing of Interfaith, the closure of Labor and Delivery services at North Central Bronx, the closure of several St. Vincent locations, and the yet-to-be-determined loss of units at Mt Sinai/Beth Israel/Roosevelt/St Luke’s merger) then you’re probably wondering, what does all of this have to do with you?

All the “useful literature” an FJC member received from Interfaith’s Nurses Union, Interfaith has about 11,000 inpatient and 250,000 outpatient visits a year, employees over 1500 people mostly from the central Brooklyn neighborhood, and is facing financial pressure to close with layoffs this year.

This election period in particular is especially hectic, and it’s no accident.  In the last year, Labor and Delivery was cut at North Central Bronx Hospital, leaving thousands of mothers without local care and hundreds of workers to transfer to unfamiliar units; Long Island College Hospital shuttered its doors and laid off its workers and medical residents; Mt Sinai is taking over Beth Israel, St Luke’s, and Roosevelt Hospitals in which cuts have already started, and more are on the way without any communication to workers or patients; and Interfaith Medical Center has made its determination that it will close, sending layoff notices to over 1500 employees and it is holding on now by a last ditch injunction pushed by DeBlasio in a cynical campaign move.  And when the hospital closes either on its scheduled date (currently slated for November 14th of this year) or a month or year after, DeBlasio’s position will be sealed, along with his healthcare package.  On top of this, many of us–underwaged workers (many in healthcare), the elderly,the disabled, and unemployed people are facing “medicaid redesign” and medicare sequestrations which will cut access to care even more drastically.

Many politicians have been putting their electoral and legislative weight behind issues that matter to people, because they can’t ignore the real crises that workers and patients are facing all over the city, and have to address them when campaigning. But should we be relying on them to make actual changes?  We need to be clear that even if some politicians are very well-meaning people, they have to operate based on what will give them leverage to get elected.  This means appeasing lawmakers, making connections with businesses, and supporting “public” institutions, which operate nearly the same as “private” institutions in terms of how they treat workers and clients.  Politicians get their power from laws that keep people down, like no-strike clauses for public workers, or laws that prevent workers from expelling bosses from hospitals and clinics and running hospitals them themselves. And politicians make sure that everyone thinks electoral politics is the only way to gain power, afraid that every day people will realize the power is ours.

Unless we come together to fight on our own, outside of elections, come November, Bill Deblasio, Elliot Spitzer, Laurie Cumbo, and the rest will be nowhere to be found, and we’ll still be facing layoffs, overwork, the boss we hate, tension between coworkers because of short staffing, and cuts to essential care that will literally leave some of us dying in the streets.  Meanwhile, “our” unions will have spent much of the year’s time and dues creating propaganda that will find its only home in New York City’s dumps, while workers go on needing strikes, work slow-downs, and takeovers to make the changes that are needed.

It would be easy to let this knowledge make us feel helpless, but Florence Johnston Collective and most of the other workers and patients we are meeting find a great deal of strength in recognizing that not all of our hope rests on elected representatives.  Although hospitals are being cut, the reality is that they contain an enormous amount of material resources (beds, equipment, buildings, sheets, tables…) and a high quality of worker (nurses, CNAs, PCTs, custodians, kitchen workers).  The problem is, hospitals, clinics, and nursing homes don’t currently run just to take care of people.  Instead they need to make a higher and higher profit, by making workers work harder for less, and by refusing treatment to people who aren’t rich.  While politicians may be able to “save” a hospital for a week, or even a year, they do not know how to run the hospitals, and they are definitely not using the much needed services that low income people use.  We are the ones who use the hospitals, and we are the ones who make them function, so we need to be the ones to reclaim them.

This election day, we want to leave you with a few examples of communities that have overcome their politicians and even their official union leadership to cut across job descriptions, legal barriers, and patient/worker relationships to fight back and win!

These are really only a few of thousands of revolts of workers and communities, who have been fighting for our lives for hundreds of years.  This election day, make sure you talk to your co-workers about these struggles and think about what we can do to replicate them all over the city and the world!  And of course, FJC is still out on the streets and in care clinics, hospitals, and neighborhoods every day..  Hit us up if you want to get involved!