One of our members got to chat with Mandy from PhilosophyofHealth.org about Silvia Federici’s Caliban and the Witch: social reproduction, bodily discipline, gender, capitalism and working class struggle.  The interview could serve as an introduction to Federici’s ideas, some foundational concepts that drive our work as a collective.  Thanks to Mandy for hosting us!

On Sunday night at 6PM, October 26, join the Florence Johnston Collective (Flo Jo) for the movie series at the Base. A discussion will follow the screening. Come enjoy light refreshments and hang out with us! Details in the flyer below.

What is the future of struggles around social reproduction? As 2014 winds down, capital continues its offensive against reproductive labor conditions, women and trans* power, social programs, and overall quality of life for working class people in New York and beyond. Where are people pushing back? And how can we forge meaningful connections capable of linking these struggles without glossing over their particularities?

Florence Johnston Collective is an autonomous and unfunded group by and for working class people, dedicated to advancing struggle and generating analysis around issues of social reproduction.

Over the past year we have met countless inspiring people who share our desire for radical change in social reproduction. In our pickets, flyering, public meetings, movie screenings, reading groups, and door to door campaigns, we have met folks of every stripe who share a common desire for a society based on human need, and capable of human care.

As we plan our next steps, we want to hear from you.If you share our vision, want to discuss the future, or just want to hang out and see what we’re all about, join us for a dinner event to welcome the Fall and plan for the spring ahead. Bring your friends, co-workers, family, children, lovers, and let’s put our heads together toward a meaningful way forward. 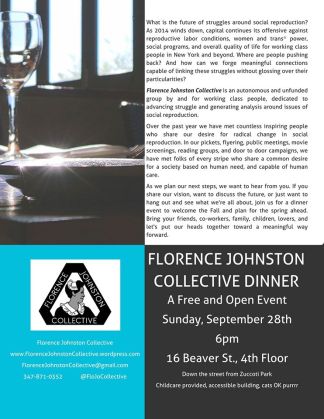 Recently, Flo Jo has been paying attention to Tennessee,  where the State now has the authority to criminalize women for potentially harming their newborn children with drugs.  Last week, the first woman was arrested under this new law. We have been working on a two-part series on the law, an analysis of what it means, and what we think care workers should do in response.  Below is the first article in this series.

Tennessee recently passed a law, S.B. 1391, making it the first state to prosecute women for criminal assault if their fetus or newborn is considered harmed due to illegal drug use during pregnancy.  Criminalization of pregnant women and mothers is one side of the various ways the State attempts to control reproduction and discipline womens’ bodies.  This is an attack against working class women of color not unlike those we have seen in Texas, California, nationally and globally.  All of these measures will impede women’s access to health care and efface women’s reproductive skills and knowledge.  But unlike abortion restrictions and forced sterilization, the Tennessee law is an attempt to divide feminized workers under the guise of “protection” of women and children, a strategy we are likely to see more frequently as the economic crisis deepens.

Today’s crisis is manifested in the inability of the class to take care of itself, or reproduce itself; it is a crisis of reproduction.  Wages are so low that the class cannot afford to get everything it needs to go to work every day.  Of course, “everything” we need is a relative term based on time and place; workers in America need a smartphone and cable TV after years of changes in living standards.  The class has supplemented this crisis of reproduction with personal debt.  We get credit cards to buy clothes and pay our cell phone bills and we take out student loans we will never pay back to make an extra $3/hr.  This is what life looks like for the working class today.

For the ruling class, there is another type of hustle.  It is a general law of capitalism that profits must always increase.  So capitalists make changes to the workplace, by introducing more and more machines and pushing workers out of the production process, to ensure an increased profit.  However, this catches up to them.  Since workers are the only ones capable of creating value (there is always a worker somewhere in the production process!), the more capitalists push workers out of the production process, the more the profit margin weakens.  Couple this phenomenon with the working class’s increased dependence on debt and loans and we find ourselves in today’s economic crisis. 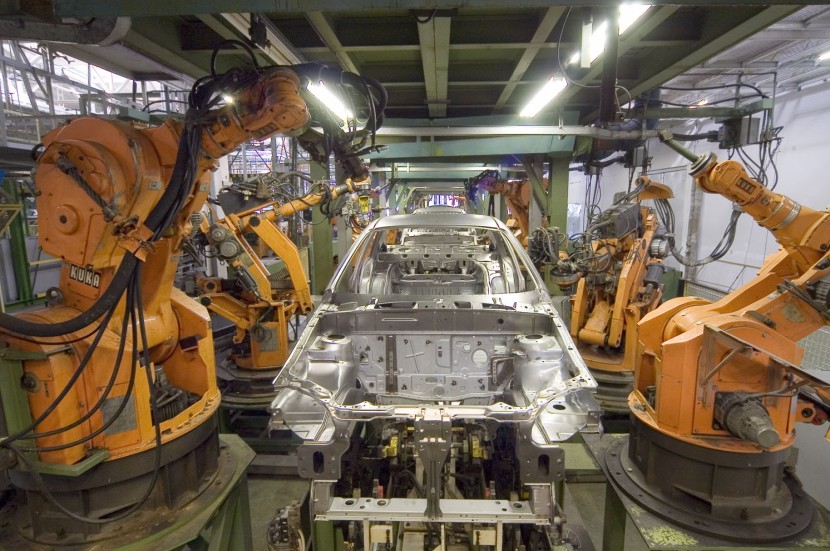 On top of this, because so many workers are pushed out of the production process (consider Detroit’s 23% unemployment rate for example), a surplus population of workers makes it possible for capitalism to pit people against each other in competition for jobs.  In this sense, the ruling class has an interest in controlling the actual number of workers there are in the world at a given moment, based on the needs of capital.